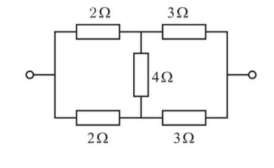 I have a circuit like this. And, I want to calculate resistance from here. I was following these steps.

I was calculating resistance for left side circuit.

Then, I took series and parallel circuit. Then, calculated equivalent of resistance.

I am not sure if it is correct. If it is wrong than how can I proceed?

circuits parallel-circuits electrical-resistance electric-circuits series-circuits
posted over 1 year ago
CC BY-SA 4.0
over 1 year ago
deleted user
Permalink History
Why does this post require moderator attention?
You might want to add some details to your flag.
Why should this post be closed?

No, the answer can be seen by inspection in a few seconds, and it's not 2.8667. We don't just give answers to homework problems here, so I'll only make a few comments on the problem and your attempted solution:

In my other post I had added main question. I forgot to add it here.

So fix it. Trying to excuse it instead of fixing it is a waste of everyone's time. We don't care why, only what is.

I find that hard to believe. I don't know much about MathJax, but surely there is a way to insert a hard space.

What current flows thru the 4 Ω resistor? I don't have the value.

The point was to make you think about the circuit, not the actual numbers.

Try this exercise: Consider what happens when the left end of this circuit is held at 0 V and the right end at 5 V. If the 4 Ω resistor weren't there, what voltage results at each of the two junctions between the resistors? What voltage is therefore across where the 4 Ω resistor would be? You can convert this to a Thevenin voltage source. What current would flow thru the 4 Ω resistor if it were then connected as the circuit is actually shown?

General comments (1 comment)
Sign up to answer this question »
Featured
How can we grow this community?
The Great Migration is underway