Is it rational to freeze water bottles during colder nights, and place them in front of a fan during warmer days?

Pour 3 tbsp (51 g) of salt into each of your 3 plastic water bottles. Use disposable plastic bottles for the easiest set-up and clean up. Pour 3 tablespoons (51 g) of table salt per bottle. Put the caps back on and shake the bottles to thoroughly mix the salt. 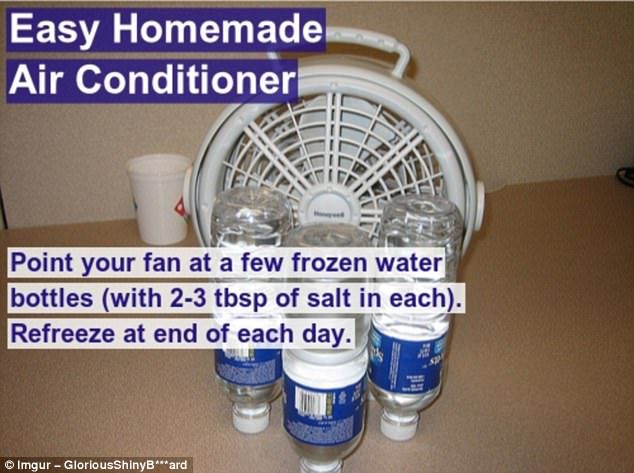 VLDR‭
-19 reputation 9 0 -22 10
Permalink History
Why does this post require moderator attention?
You might want to add some details to your flag.
Why should this post be closed?

TL;DR Yes, that will work. It may not be practical, but that is a separate issue.

There are two measurements routinely used for cooling in the US:

Even though modern systems are based on transferring heat in very different ways, the terminology, based directly on the cooling provided by melting ice, remains.

Back to the practical problem:

In the olden days, the ice came from elsewhere. There was an industry that for many years would make ice in bulk and deliver it for cooling purposes - particularly for home refrigeration. It wasn't that long ago that some people would refer to a modern refrigerator as the "ice box".

However, if you produce the ice inside then you are really just trading energy. You take heat out of the water to make the ice, and put that heat into your house. Your net gain of cooling is zero - actually worse, because your freezer isn't 100% efficient. An actual air conditioner sends the hot air outside.

In addition, water from the air will condense on your ice containers as they melt. That lowers the humidity (which is good) but the water has to go somewhere or else you will have a mess. In an air conditioner this is called condensate and every air conditioner has a system (sometimes just a simple drain pipe, sometimes involving a pump) to handle it.

manassehkatz‭ staff
71 reputation 0 3 7 0
Permalink History
Why does this post require moderator attention?
You might want to add some details to your flag.

Sign up to answer this question »
Featured
How can we grow this community?
Codidact Technical Roadmap
Hot Posts
Q&A — Why series springs behave like parallel? A comparison between parallel resistance and series spring.
Q&A — What's the meaning of "outdated" in physics?